AUGUSTA, Ga. – Tiger Woods won his first major in 11 years by taking the Masters on Sunday, capping a years-long comeback that might be the greatest redemption story in the history of sport.

The other big story this weekend? Sportsbooks took it on the chin, with bettors everywhere taking Tiger over the field.

Last year, when Woods was in contention at the PGA Championship, the big news (in addition to the prodigal son’s continued hike back home) was that all the nation’s newly-opened sportsbooks avoided a financial calamity by the skin of their teeth.

Despite a decade of struggles, the betting public was still putting big money on long odds on Tiger, going off of his name recognition and reputation more than his contemporary talent.

But instead of being plunged into the red, the books escaped a collective bad beat when Brad Koepka trumped Woods by two strokes.

Now, the books have apparently made the same mistake, and this time, Tiger bit. Hard.

William Hill, one of the international bookmakers that has expanded considerably in America’s legalization of sports betting, had its worst weekend of golf ever, posting a multimillion-dollar loss.

Other books also lost big, mostly on promotional wagers. With Tiger among the tournament leaders on Saturday (he was in contention for every round), DraftKings inexplicably bumped his odds from 3-1 (+300) to 10-1 (+1000). 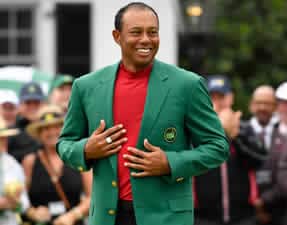 On Sunday, when Tiger was actually leading the Masters down the back nine, DraftKings extended his odds further to 13-1 (+1300). Typically, books shorten odds on tourney leaders.

FanDuel – DraftKings’ primary competitor – lost over $2 million on Tiger promotions for the Masters. However, this was more the result of a fantasy sports contest, not of action limited to the company’s sportsbooks.

While the sportsbooks making headlines in Tiger’s wake look like they’re run by incompetent beginners given last year’s close call and this year’s alleged debacle, that may not be the case.

There are two aspects to consider when discussing these sportsbook losses. The first is that they’re limited mostly to the newer operators that are helming expanded sports betting in newly legalized markets.

But “growing pains” doesn’t necessarily explain things, as these books aren’t new to the business, just to the US market. And golf, remember, is an international betting sport. These vendors know Tiger, and they know him well.

Consider the biggest reported loss at an established book in Las Vegas, where the Westgate SuperBook reported a “high five-figure net loss” on Masters futures. That means that this book lost a maximum of $99,999. That’s not great, but it’s not too bad, either.

The second thing to keep in mind is that none of these losses amounts to much more than a major event ad buy. Take FanDuel, which seems to be making a habit of giving itself a perceived public “disadvantage.”

An operator in FanDuel’s position wishes to make a splash. As with lotteries, the only way to do that is with payouts. The average bettor doesn’t want to hear about how good a book is at making profits for itself, after all.

In FanDuel’s case, the multibillion-dollar company effectively paid about half the price of a thirty-second Super Bowl ad to be the piggybacking story on a piece of major sports news a decade in the making.

And that’s got to be worth it.

Andy has been writing professionally for nearly two decades, with the last three years being dedicated to his primary passions: sports wagering news and gambling industry analyses. A walk-on punter, Andy has a particular interest in professional football, baseball, and horse racing betting. Come early May, you can always catch Andy – clad in all white, mint julep in hand – on Millionaires Row at Churchill Downs. In his dreams.