The name “Pete Rose” has a negative connotation when it comes to sports betting. People often equate his name to wrongdoing because he would consistently wager on his teams to win. That is deemed unethical by not only the league, but also the public. Pete Rose would bet anywhere from $3,000 to $10,000 a day on his team to come out on top. Rose would wager on baseball because he loved the game and the extra thrill he got when he put money on it. As a manager for the Cincinnati Reds in the late 80s, he was found out by the league through his bookies.

He was let go by the Reds after an investigation into his behavior. Not only did he lose his job, but he was also banned from the Hall of Fame as well as barred from entering the Great American Ball Park, the Reds stadium. After all of the things taken away from him, he went on public television to say that he understands his sports betting was disrespectful to the game of baseball. Rose made his living off of being a manager for different MLB teams but his sports betting habits have helped his $3 million net worth as well. 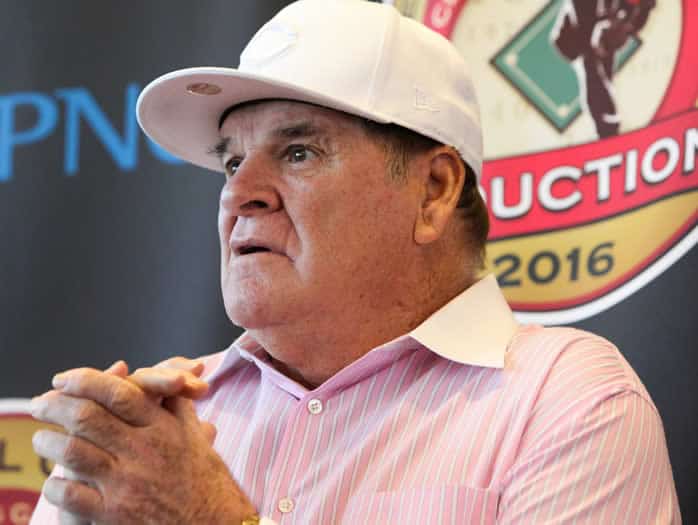 Pete Rose may be the all-time hits king in the MLB, but those, 4,256 hits pale in comparison to all of the betting options at Bovada. At any given moment, Bovada offers hundreds, if not thousands, individual game odds, even more futures odds, and of course an incalculable number of player props. A wide selection of odds such as that is unmatched at any other legal sports betting site, meaning players do not have to bet just on the Reds like Pete Rose.

Pete Rose Does Not Shy Away

Pete Rose may have been caught gambling on the Reds, but in the modern era of legal sports betting, Rose has not shied away. The MLB’s all-time leader in hits may have been ousted by the league that he loves, but he still bet on Major League Baseball frequently. Most of his bets are on his beloved Cincinnati Reds, although that has been much less than rewarding based on the Reds’ recent history.

Outside of betting on the Reds, Pete Rose has yet to show much in terms of style or technique when he gambles. Rose is much closer to the general public rather than other famous sports bettors because he bets with his heart even though the Reds have rarely been a great bet. With the repeal of PASPA and the near-universal acceptance of gambling amongst sports leagues, the hope is that one day Pete Rose regains his throne amongst the All-Time MLB greats one day.

Rose was undeniably a Hall of Fame level player, and his denial of that honor has rankled him. However, it is clear that Rose’s story has changed consistently in terms of what he has admitted to doing. For years, Rose claimed that he never bet on baseball. Once it was proven that he did, he claimed he never bet on his team. Once that was proven, he claimed he only bet on his team to win, and only as a manager. In 2015, ESPN discovered a notebook containing wagers allegedly taken from Rose during his playing career. John Dowd, who investigated Rose in 1989, said of the evidence “This does it. This closes the door,” referring to any chance of Rose ever making the Hall.

In 2020, Pete Rose returned to the sports betting world. This time, instead of betting for the sole purpose of winning, Rose is now aiming for a better healthy life. As an official partner of HealthWager, Rose has successfully launched the Pete Rose HealthyWafer challenge. The challenge gives chance for $10,000 to contestants if they manage to hit their targeted weight loss goals by June 30. The challenge runs from January until the end date. Not to be left out, Rose has also set his own weight loss goal to get 10% body fat. Should he reach his target, he can win $2,000 himself. The money is what initially motivated him to win bets, now it’s what motivates him to lose weight.

A Wager Placed On Pete Rose Regarding The MLB

Pete Rose has requested that the MLB take the lifelong ban from league activities that was placed upon him for sports betting off. He is currently on the list of ineligible people to be associated with the MLB thus making him ineligible to get into the MLB Hall of Fame despite all of the good things he brought to the game. Had he not been caught wagering on the games, Rose would be a no-brainer to make it to the Hall of Fame and he knows it, which is why he has petitioned the league to remove the ban.

He has issued various arguments on the grounds that other people associated with the league have done much worse and have not been reprimanded in the same manner which is unfair to Rose. A wager on sportsbooks was posted for the issue and asked gamblers if the MLB would lift Pete Rose’s lifetime ban in 2020. The heavy favorite answer was “NO” at -1000 and “YES” at +500. As of 2022, Rose is still ineligible to enter the Hall of Fame.