When anyone thinks of the all-time greats in the sport of basketball, Michael Jordan will always be associated with being one of them. While Jordan played in the NBA and had a stint in minor league baseball, he is a huge fan of gambling. Any kind of gambling. In his retirement, he has become an avid bettor on the golf scene. Jordan is one of the wealthiest athletes there is which is why he can afford to have such a costly hobby. When it comes to placing wagers, Jordan has no strategy other than a drive to win and a competitive streak like no other. He often places six-figure bets on the smallest of wagers and they don’t often payout.

Again, he gambles for the thrill of it all but has gotten himself into a hole every now and then. His love of betting on golf has gotten him down on his luck more than a few times. It’s not just that he loves to gamble, the amount he wagers on even a single hole is ridiculously high. However, Jordan continues to bet on any kind of competition, chasing that feeling of winning big. As long as he has the money to do so, he will continue to place bets on golf and any other sport because he truly enjoys it. 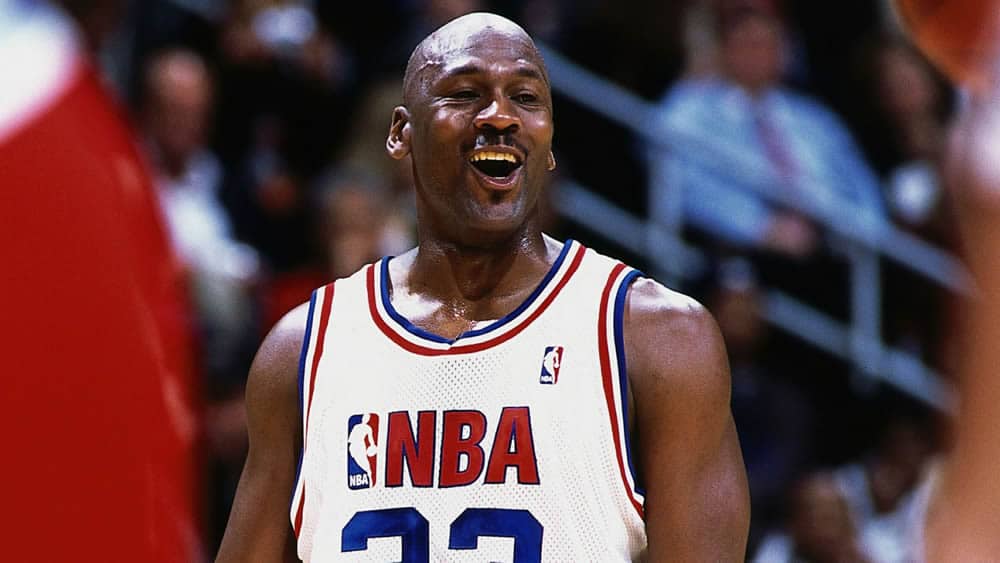 From Chicago Bull To Gambling Sharp

Michael Jordan is best known for playing in the NBA as a shooting guard for the Chicago Bulls for 12 years. From 1993-1994 he was a minor league baseball player for the Chicago White Sox due to the murder of his father. It was his father’s dream to see his son play as a professional baseball player. After one season in the minor leagues, Jordan returned to the Chicago Bulls. While he was playing in the NBA, as early as the ’80s, it was no secret that Jordan enjoyed placing legal sports bets. It wasn’t because he needed the money, he was already worth millions. He did it for the rush of winning.

One of the earliest stories of his love of betting comes from when he was on the road with the Bulls. A time before private planes were the way a team traveled. At an airport in Portland, as Jordan and his teammates were waiting at the luggage pick up area, he bet his friends that the first piece of luggage to come rolling out on the conveyor belt would be his. Multiple teammates wanted in on this wager, all putting down money. Low and behold, Jordan’s bags came out first and he pocketed hundreds of dollars. Unbeknownst to his friends, he bribed an airport worker into placing his bags upfront simply because he wanted to win. His love for gambling has continued and he has had a lot of success in sports wagers.

Michael Jordan’s Love Of The Game, The Betting Game

Michael Jordan is a member of Forbes’ list of billionaires with a net worth of $2.1 billion. A meager $94 million came from his career in professional sports. He then received over $480 million in Nike endorsements over a span of 12 years. Millions of dollars also came in from deals with Hanes, Gatorade, Upper Deck trading cards, XEL cologne, and the royalties from the infamous “Space Jam” movie.

Being a billionaire hasn’t stopped Jordan from the betting game. He can’t stop himself from his need to compete. That is what makes him one of the most famous sports bettors in the world. It has been reported that he put $100,000 on multiple games of “Rock, Paper, Scissors.” These days, Jordan loves betting on golf. He has been known to place $300,000 on a single hole of golf. At one point, Jordan was down $1.25 million in the golf game after only ten days of bets.

Jordan borrowed the money from businessman Richard Esquinas to place these wagers. He was able to win enough to lessen his debt to $902,000. When it came to paying Esquinas what he owed, he was hard to find. The two eventually came to an agreement where Jordan would only need to pay back $300,000 through an installment plan.

While his brief retirement from the NBA to play baseball was said to be part of his grieving process over his father’s death, many believe it was the NBA’s way of covering up Jordan’s gambling addiction which would have led to his suspension. In order to keep his image clean, he retired and joined minor league baseball. Jordan continues to wager on anything he can, but golf bets remain his favorite. With almost $2 billion in assets, he can afford the luxury of being a high roller in what is now his favorite pastime during retirement.

Fast forward to now and that old conspiracy theory about Michael Jordan’s first retirement having to do with his sports betting is back. The theory suggests that Jordan was asked not only by the league but by the NBA Commissioner at the time David Stern, to retire as to not embarrass the NBA with the news of his sports betting activities. Despite Jordan having had a huge hand in the sports betting scene back then, his friends, family, and former teammates all say that it was Jordan’s choice to take a two-year break before returning to the game. They all maintain that it was his decision as he needed to take the time off for himself to get his head back in the game and take a well-deserved rest away from the limelight.

Where Is He Now?

Michael Jordan is still partaking in legal sports betting regularly. Nowadays, Jordan’s money to wager on sports is coming from a multitude of lucrative endeavors. Jordan is the majority owner of the NBA Charlotte Hornets. When Jordan first took over the team was worth $175 million. Now the Hornets are worth $1.3 billion which is the largest contributor to Jordan reaching billionaire status. Jordan’s major sneaker deal with Nike also contributes greatly to Jordan’s excess betting funds. The Jordan brand is has a yearly revenue of $3.14 billion from 2018-2019. Jordan is said to have received $130 million from sales. It is no surprise that Jordan is able to still be a high roller sports bettor.

The fact Draftkings brings in all kinds of money is the sole reason why Michael Jordan wants to be apart of this. Jordan is a huge on gambling as we know so the fact that he is involved in Draftkings is no surprise. Being a special advisor on the DraftKing board of directors is a huge move for the Greatest Basketball player of all time. Giving great guidance and business suggestions are what he can help with. Also knowing that he will be apart of the Charlotte Hornets as well means Jordan will have a lot on his hands but he is used to this.