Born Haralabos Voulgaris in 1975, Bob Voulgaris is a Greek Canadian sports bettor and poker player that is a pro in sports betting. Unlike many professional gamblers, Voulgaris enjoys the limelight, and he’s embraced the fame that’s come with his legendary NBA exploits. He is looked upon by those in the gambling community as “the world’s top NBA gambler,” and he certainly has the chops and the net worth to back that up at $2 million.

Like most modern practitioners of legal sports betting, Voulgaris is a definite math guy, taking advantage of advanced metrics and modern stat tracking to decide on his wagers. However, his biggest edge was that he also brought a little bit of psychology into the mix. That probably explains why he’s been able to succeed not only as a professional sports bettor but as a professional poker player too. Voulgaris also has the uncommon distinction of having successfully transitioned from one sports betting style to another. Twice. 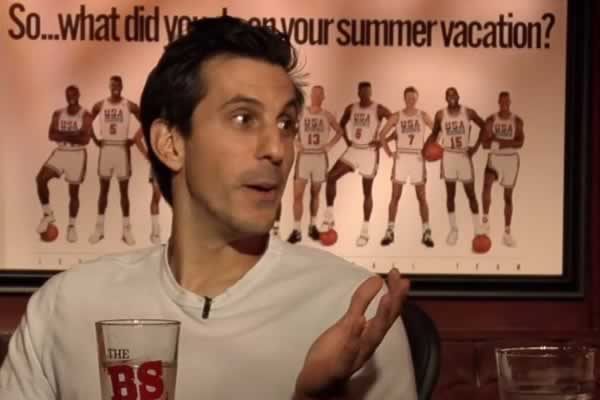 The late 1990s saw a twentysomething Bob Voulgaris come out of nowhere to put together the most successful run of legal sports betting on the NBA that the sport has ever seen. While there is no consensus as to exactly how much cash Voulgaris cleared during his heyday, it is reported that he was regularly flipping a million dollars a day on league games. But even with that kind of money on the line, many analysts argue that, during this streak, Voulgaris was less interested in raw numbers than he was in the specific mannerisms of the teams he followed.

Voulgaris was particularly concerned with the behavioral cues of a trio of NBA head coaches. By watching their game management habits and quirks, Voulgaris was able to reliably guess what their next moves would be in most situations and place the requisite prop bets. In this way, coaches Eddie Jordan of the Washington Wizards, Jerry Sloan of the Utah Jazz, and Byron Scott of the New Jersey Nets were under a microscope they didn’t even know existed. Of course, coaching styles evolve and teams change leadership roles, so Voulgaris’ luck in this tack eventually ran out. He started missing bets, and his otherworldly 70 percent win rate dipped to pedestrian levels.

Bob Voulgaris bounced back in 2002 with a brand-new tactic for having winning bets on the NBA. Voulgaris moved on from watching coaches play calling styles and instead evolved his winning strategy into watching the sportsbooks themselves. Bob began taking heavy action on the spread for first and second halves of NBA games. While this is still standard practice, sportsbooks were not holding into account the increased scoring output that comes in the fourth quarter league-wide. Instead, bookmakers would total the final score and split the results in half. This allowed Voulgaris to take advantage of the system and string together a new trend of winning wagers. Data and analytics eventually caught up to sportsbooks, and Bob’s sure thing strategy was no longer possible. Once again, the Voulgaris strategy becomes antiquated.

In 2005, Bob Voulgaris decided to use the NBA’s newly-released play-by-play stat publication system to make a computer program that could play the spread far better than he ever could. After two years, he partnered with the “Whiz,” a programming and math prodigy whose identity Voulgaris guards as closely as the methodologies the pair would come to employ in their sports betting wonder-machine. After several years of tests and modifications, that machine, called Ewing, was ready for primetime, and it made Voulgaris and his secret business partner a lot of money ever since.

In addition to all of the above, Bob Voulgaris is also a very accomplished poker player. Meaning that he has a great talent to read others which is what he did while betting on the NBA. His talent helped him to win over $3 million in his poker career. Eventually, one NBA team picked up on his ability and was hired by them as their Director of Quantitative Research and Development. That team is the Dallas Mavericks as he was hired back in 2018. He took the job with Dallas in an effort to work closely with Mark Cuban and learn the tricks of the trade. That was until 2021 when Voulgaris stepped away from his position on the team after a fallout with the front office.

What Does Bob Voulgaris Do As A Director Of Quantitative Research & Development?

The Dallas Mavericks hired Voulgaris in 2018 to head up a new position that people were unsure of. After all, sports betting, especially gambling on the NBA is what Voulgaris is known for and yet there are no real legal state-affiliated sportsbooks in the state of Texas. So, what exactly does a Director of Quantitative Research & Development do? Voulgaris plays a vital role within the Mavericks’ organization when it comes to building a roster that will play out well.

His years of experience researching and choosing winning teams for bets in the NBA have crossed over into working out to help one team play with their best players to win more games. He uses the same data and statistics he would use to place wagers in the past but now uses the information to create a better team. Without the wagering aspect, he is basically living an NBA sports bettors’ dream of having a hand in creating what will likely be a winning lineup for the Dallas Mavericks on gamedays. We’ll see what the future holds for Bob Voulgaris in 2021, as the Mavericks have a lot of hope moving forward.